Central clearing counterparties (CCPs) are particularly vulnerable if multiple traders collapse at the same time. One source of such risk is when trades crowd on a single security or risk factor. This risk is overlooked in standard CCP risk management practice.

CCPs are introduced the world over as a response to the 2008 financial crisis. CCPs however do not eliminate systemic risk as CCPs effectively become the pressure vaults. Their collapse might trigger another crisis.

Crowded trades constitute an overlooked risk for CCPs as they do not show up in individual traders' portfolios. Yet, all else equal, if all traders trade a single security or risk factor, a CCP is more likely to experience multiple trader default. A large return on the crowded security pushes half of its members' trade portfolios under water.

I have studied this risk in a recent paper and come to a number of findings.

Perhaps the two most relevant graphs are:

The above graph depicts total aggregate margin for Nordic equity in a 2009-2010 sample. MarginCCP is the actual margin that was posted. Margin(A) is the newly proposed margin that accounts for crowded risk. 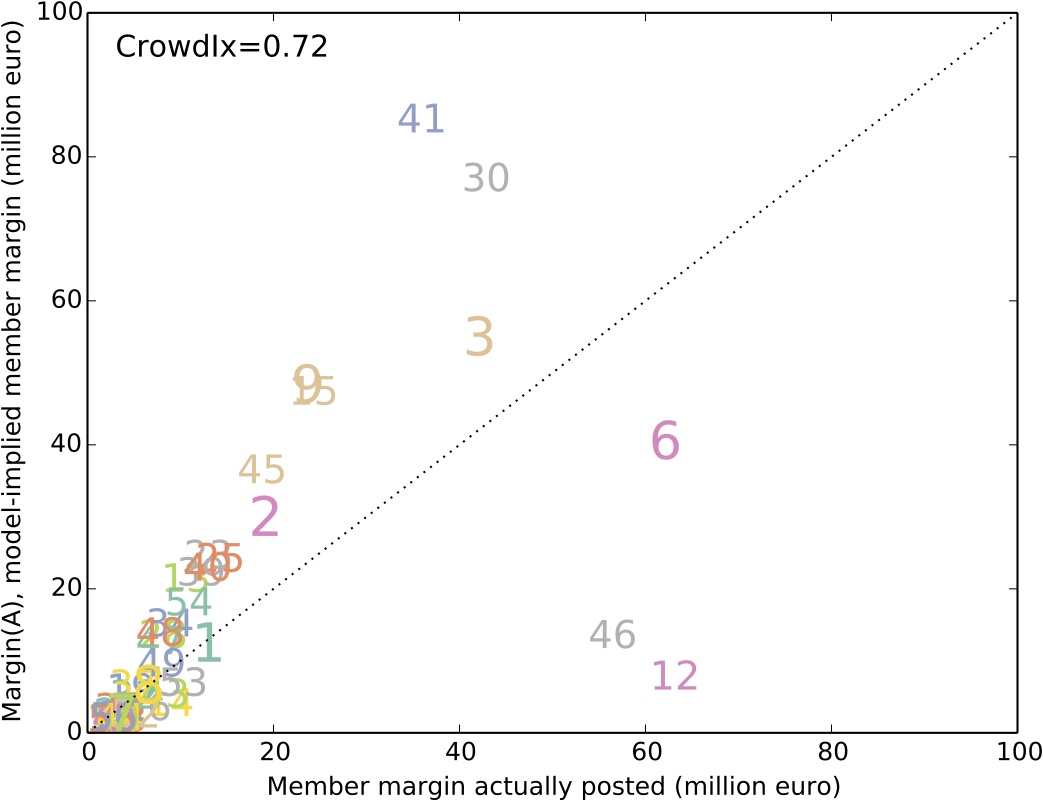 The above scatterplot depicts for each clearing member the margin that was posted against the margin that should have been posted had crowded risk been accounted for. The 57 clearing members are anonymized by a random number between 0 and 100. The plot pertains to April 23, 2010, which is one of the two peak margin days in the sample. This is just after Nokia announced very disappointing Q1 earnings. For example, member 41 posted less than EUR 40 million but should have posted more than double that amount. His trade portfolio was heavily exposed to Nokia. Member 12 posted more than EUR 60 million but should have posted less than EUR 10 million. For member 12 Nokia was not a top-ten exposure.

You find the paper here.