The fundamental value of bitcoins 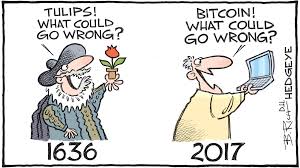 “What do you think of bitcoins? You are an economist, no? Is there any value to them?”

The conversation falls silent and all eyes turn in your direction. This undoubtedly is an all too familiar experience for many of us economists, peaking at Christmas drinks last year. Many cryptocurrencies were trading at all-time highs. Prices have dropped since, but the question remains: Is there any economic value to bitcoins and, if so, what is it?

The quick way out is to say: It is fools' gold. There is no value, it is a perfect bubble upheld by irrational investors. Hmmmm. Not very satisfying if one sees so much money pumped into these digital currencies, including smart, hedge-fund capital.

Can’t we rationalize bitcoin prices by considering it a currency with transactional value? Owning bitcoins might allow you to trade goods and services cheaply or, at all (e.g., international transfers). Such convenience yield trades off against the ease with which one can convert one’s own traditional cash to bitcoins and vice versa.

The only way to find out is to write down a model with rational agents. In the best case one arrives at a falsifiable prediction which can then be taken to the data.

Where does one go to find the mathematical rigor needed to build a solid economic model? To France! (There is a reason why so many mathematical results have French names.) My co-authors in the project developed a model that anchors the required return on bitcoins firmly in an equilibrium model, in the tradition of Tirole (1985). The model predicts that the required return on bitcoin is higher when the cost of converting bitcoins to traditional cash is higher. The required return is lower at times when the convenience yield is higher (i.e., when lots of goods and services can be purchased with bitcoins).

The data seems to support the model. So, the answer is yes, bitcoin prices can be fully explained by a classic (REE) model, no irrationality needed. In our working paper we find that required returns on bitcoin were high at the beginning of the sample period (2010-2011) when it was hard to exchange bitcoins for goods and services. They were also high at the end (late 2017) as fees paid to miners were high due to congestion on the blockchain.

Bitcoin pricing can therefore be rationalized. At the next drinks, ask again, I will have an answer.